"If I Speak with the Tongues of Men and of Angels" 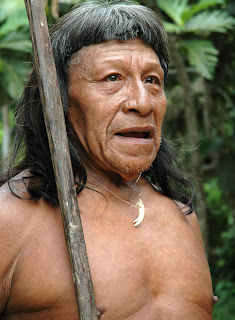 Several years ago, I had the opportunity of meeting and communicating by letter with a missionary by the name of Helen Constance. She was a missionary who served alongside her husband, George with the Christian and Missionary Alliance for many years beginning in 1935. They served in Colombia and faced many hardships and joys during that time. In her book, "Stepping Out on Faith", she included many of the poems she wrote describing missionary life and the various people they encountered. I would like to share one of her poems. It tells of an Indian that George and Helen met along the Amazon River and the terrible atrocities that he and his people endured when the "white man" came to their part of the world in search of rubber at the advent of the motor car.

The sun was sinking in the west
And the afternoon shadows fell
On the face of an old, old Indian
A century had marked so well.

He sat by his bamboo cottage
And thought of the years gone by-
Years he wished he could forget
As he waited now to die.

He lifted his eyes to the river
as he heard the familiar roar
Of another outboard motor
That would pass close by his door.

The roar of those noisy motors
He wished he never knew.
He loved the sound of dripping paddle
Guiding silently his canoe.

A dugout with outboard motor
Stopped near the old man's door
And he watched with apprehension
As a white man cam ashore.

He did respond as the stranger
Waved in a friendly way;
When the man drew near, the Indian
Had nothing at all to say.

Yes, he understood Spanish,
Though he spoke it brokenly,
But he would not talk with the white man
But sat there stubbornly.

While the white man told about Jesus
and how He had come to die
That the Indian might have eternal life
In a home beyond the sky.

He shook his head as the white man
Told of Christ's death for sin
And how God could change a wicked life
And put love and peace within.

And then, with frustration and anger
The Indian spoke at last;
He said he did not believe it
And could prove it false from his past.

"Long ago," he said, "in the forest
We were happy, peaceful, free;
With our jungle trails and dugouts,
Our tribe and family.

"But the white man came and enslaved us
And sent us to forest trails
For rubber- as much as he ordered-
Or death to the one who would fail.

"I tried so hard to get plenty,
But my quota I could not fill;
They said the tribe was just lazy
And to teach us, they had to kill.

"So my wife and my sons were beaten
Till the blood on the ground ran red,
And my brother was horribly tortured
Until at last, he was dead.

"And I cannot forget my young daughter-
Just 14 and sweet and shy.
They beat her until she crawled away
To the forest alone to die.

"In the jungle, searching for rubber,
I wanted to take my life,
But they said,'For every dead Indian,
There is torture and death for his wife.'

"When at last the white man departed,
Just a few of the tribe remained-
Disheartened, discouraged, defeated,
Our souls with hatred stained.

"You talk to me about Jesus
And I remember only the boss
Who ordered his men to beat us, yet
He wore on his neck-a cross!

The lash of the horrible bullwhip,
The memory of screams in the night,
and when the torture was over,
To the Virgin they lit a light.

"Every act, every deed of cruelty,
We noted with growing despair,
Ended by making the sign of the cross-
'Twas the symbol they used in prayer.

"White man, don't talk to me of a cross,
Don't tell me it takes away sin,
For the scars I bear on my body
Prove the cross makes beasts of men.

"And love-did you speak to me of love?
The only love I remember today
Is the love of my tribe and family
Which you and your cross took away!

"Too late, white man, is your message,
Too late this poor soul to save.
I've known only cruelty and hatred,
and with this I go to my grave.

"But look, white man, look up river
And see there is tribe after tribe
Of Indians who never yet have known
This beautiful love you describe.

"You say the wonderful Book you bring
Is just what we Indians need.
But no one has ever cared enough
To teach my people to read.

"Young Indians know my sad story,
But my path they never trod;
So perhaps since their hearts are not bitter
They'll believe in the love of your God.

"Perhaps to the young generation
You might prove that a God above
Sent His Son to die for the Indian
If you show him a cross-of love!

"Good-bye, good-bye, Mr.White Man!
Take your canoe away from my shore.
I'm old and I'm tired of living,
Adios-forever more!" 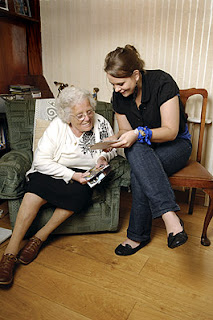 When I read this to my children, they were shocked that people could be so evil and still act religious. I related how this wasn't Christianity and we talked about the many instances where men would come to a region, and "convert" the native people, but not without a cost. This kind of "evangelizing" was not out of love, but was born of impure and greedy motives. A conversion or death. Not a very promising prospect. Where was the love of Christ? Did Christ die just so that men could force others to follow some sort of religion or for material gain?

Of course, we automatically recognize these acts as evil and wrong, but on the other hand, are we really living our lives through the love of Christ? Does the world see Christ's love in us or are we simply speaking out against things without showing love for others? Maybe we're just too busy to take the time to care. When was the last time we went out of our way to share the Gospel, to give an encouraging word, to help an older lady at the grocery store, to check on a neighbor in need, or even just to smile at someone? What does the world see when we are out with our children? Do they just see us surviving? Do they witness love between brothers and sisters or constant bickering? Do they see wives respecting their husbands or do they observe complaining or rolling of our eyes when things don't go our way?

What does it look like in our homes? Are we grumbling because there are clothes and books on the floor again? Do we genuinely love that child who is in disobedience? Are we moms so touched out that one more kiss or cuddle from a child makes us want to scream? Do we take the time to listen to that child who is aching to tell us a story or do we tell them that we are too busy? Are we loving our husbands when we complain about our day or when we tirelessly nag him about unfinished jobs? 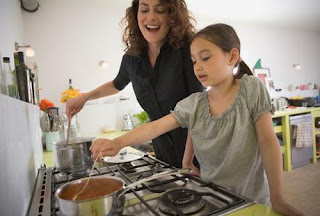 Yes, loving others can be very difficult, but Jesus commanded that we love. He said the world would know we are Christians by our love. Whether we are overseas missionaries or are ministering here at home, everything we do is to be done through the love of Christ. The fact is that we can do a lot of good. We can lend a helping hand to our neighbor, wash our children's clothes and make one hundred peanut butter and jelly sandwiches. We can stand before a huge audience and talk about the Lord. We can visit the elderly or those in prison. We can stand for life and witness to an unwed mother, but if we do anything without love, it doesn't mean a thing. May our prayer everyday be that we love. And, we can only do that through Christ. If we try to love on our own, then, we really aren't loving. Christ's love is supernatural. It's unconditional. It's sacrificial. It's beyond our comprehension. His love is why we are not consumed. His love is what saved the world. May He love others through us and may the world see the love of Jesus in our lives.

If I speak with the tongues of men and of angels, but do not have love, I have become a noisy gong or a clanging cymbal. If I have the gift of prophecy, and know all mysteries and all knowledge; and if I have all faith, so as to remove mountains, but do not have love, I am nothing. And if I give all my possessions to feed the poor, and if I surrender my body to be burned, but do not have love, it profits me nothing.
Love is patient, love is kind and is not jealous; love does not brag and is not arrogant, does not act unbecomingly; it does not seek its own, is not provoked,does not take into account a wrong suffered, does not rejoice in unrighteousness, but rejoices with the truth; bears all things, believes all things, hopes all things, endures all things.
Love never fails; but if there are gifts of prophecy, they will be done away; if there are tongues, they will cease; if there is knowledge, it will be done away. For we know in part and we prophesy in part; but when the perfect comes, the partial will be done away. When I was a child, I used to speak like a child, think like a child, reason like a child; when I became a man, I did away with childish things. For now we see in a mirror dimly, but then face to face; now I know in part, but then I will know fully just as I also have been fully known. But now faith, hope, love, abide these three; but the greatest of these is love.
I Corinthians 13

This blog is a collection of stories, experiences and just every day happenings in the life of one home school mom who is learning how to love and disciple her children for the glory of God. My prayer is that my writing will encourage other moms in this wonderful journey of bringing our children up in the fear and admonition of the Lord. So, sit back, pour a cup of something yummy and take a short breather in between all of the busyness of your day. "Soli Deo Gloria!"

Country of the Week

Pastors I Listen to Via Podcast or CD

Home school resources: The Bible, American Dictionary of the English Language by Noah Webster 1828, The National Geographic Atlas, World Book Encyclopedias, Easy Grammar, First Language Lessons for the Well-Trained Mind, Math-U-See, A Reason for Handwriting, Pathway Readers, Nature Readers, Teach Your Child to Read in 100 Easy Lessons, Apologia Science, Sonlight Read-alouds, Latina Christiana, Roman History, Ancient Civilizations and the Bible, The Light and the Glory for Children, The Prairie Primer, Beautiful Girlhood, Keepers of the Home, Contenders of the Faith, keeping house and learning outside on the farm.